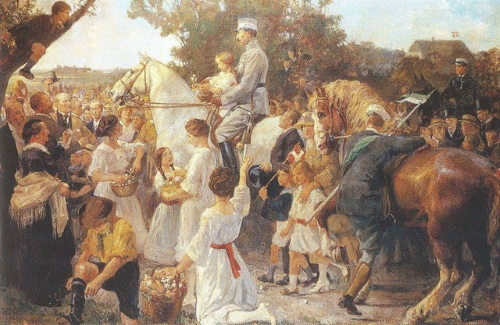 'Genforeningen' marks the centenary of the 1920 reunification after plebiscites of the most Southern part of Denmark which had been under German rule since the war in 1864. King Christian X rode across the old border on his white horse as a symbol of peace.

We will celebrate the joyous event with an interesting talk (in English) by Guest speaker Knud-Erik Therkelsen who is Secretary General of the Danish Border Association (Grænseforeningen). Previously he taught at a folk high school and was Principal of Højskolen Østersøen.

"The Danish Border Association was founded in 1920 and has supported the Danish minority in Southern Schleswig financially and with information and co operates with the German minority in South Jutland, warmly supporting trans border co-operation."

Southern Denmark is famous for their traditional Sønderjysk Kaffebord. We will serve an updated version with savoury delicacies along with the tea, coffee and will have wine available should you prefer.

Please mark your payment with your name and event for easy identification.